Bring Your Old Clothes Now!
GOLDWIN to Launch a New GREENCYCLE Program in Partnership with ICO Japan, a Global Leader in Textile Recycling

GOLDWIN Inc. (HQ: Shibuya, Tokyo/President: Akio Nishida/First Section of the Tokyo Stock Exchange: 8111) is pleased to announce the launch of a new GREENCYCLE program in partnership with ICO Japan Co., Ltd. (“ICO”). Starting May 20, 2015, you can recycle used clothes from any brand through the GREENCYCLE program. The clothes will be collected at thirty-two The North Face stores across Japan and at additional locations in the future.

Since 2008, GOLDWIN has been actively tackling climate change and other environmental problems through its “GREEN IS GOOD” concept, which involves product development and consumer outreach, as well as a broad spectrum of other initiatives capitalizing on GOLDWIN’s position as a leading sportswear manufacturer.

As part of these efforts, GOLDWIN unveiled GREENCYCLE in 2009, collecting and recycling GOLDWIN’s polyester and nylon products since the program’s start, as well as down wear since 2013. Now in partnership with ICO, GOLDWIN will begin collecting clothing from other manufacturers and brands, regardless of its quality or state (subject to some conditions).

About ICO Japan Co., Ltd.
ICO Japan Co., Ltd. is the Japanese subsidiary of I:COLLECT AG, a global recycling company based in Baar, Switzerland. I:COLLECT (“I:CO”) collects used clothes and shoes in 56 countries, mainly in Europe and North America, and is a member of SOEX Group, an industrial leader in waste reduction that recycles 700 tons of used textiles and shoes daily in 90 countries. The goal of I:CO is to achieve a closed loop production cycle (a recycling system in which raw materials are efficiently reused and circulated, without being disposed), so that the raw materials in old clothes and other products are reworn, reused, recycled, or otherwise optimally used. The collected clothes are currently sorted into approximately 400 categories and put to good use depending on their condition and purpose.

About the new GREENCYCLE program
If you are about to discard damaged or worn clothes, please recycle them at one of our participating stores. Every time you bring your clothes to the cash register, you will receive a coupon that is valid for use as of that date. Used clothes will be collected at thirty-two The North Face shops across Japan, and at more locations in the future.

*Before bringing used clothes, please note the following:
•Only clothes will be collected. Underwear, socks, shoes, hats, and gloves and other accessories will not be collected.
•Please make sure that the clothes are washed before they are brought in for recycling. Please do not bring badly soiled or wet clothes
•A 500-yen coupon redeemable at a GREENCYCLE participating store will be issued each time clothes are brought in for recycling (limit one per day).
•One coupon can be used toward a minimum purchase of 5,000 yen (before tax).
•A coupon cannot be exchanged for cash and no change will be given.
•A coupon cannot be used in combination with other coupons.
•A coupon is valid for three months from the date of issue.

The clothes you bring in will be sorted for conventional chemical recycling and down wear refining, and will be further categorized for the I:CO recycling systems. 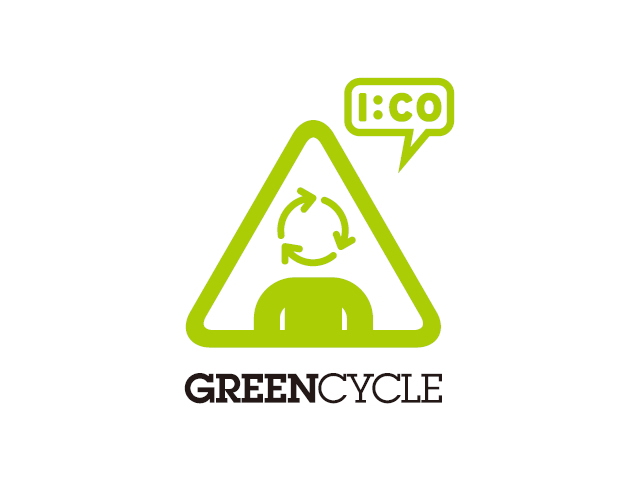 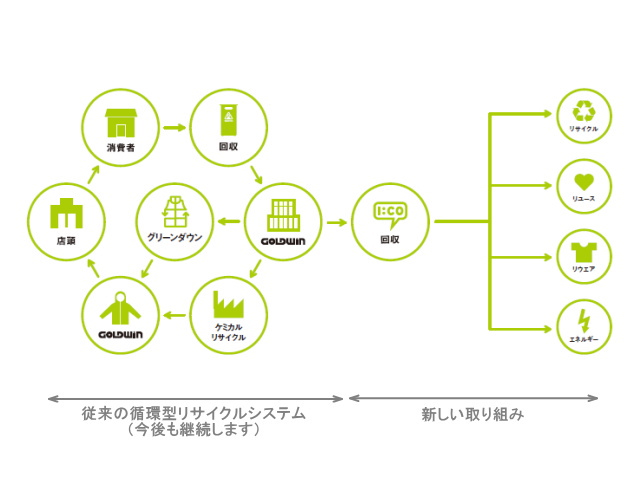