The story of GOLDWIN began in 1951 when Tsuzawa Knit Fabric Manufacturer was established in Oyabe City in western Toyama and began its journey as a sportswear manufacturer.

In 1963, the company name was changed to GOLDWIN Inc.

In 1964, GOLDWIN’s athletic wear was selected as competition uniforms for the Tokyo Summer Olympics. The uniforms were worn by 80% of Japan’s gold medalists in sports ranging from gymnastics to volleyball to wrestling.

Following the Olympics, GOLDWIN began collaborating with major global brands, including Ellesse, Champion, The North Face, Helly Hansen, and Speedo, and established itself as a leading athletic gear manufacturer in Japan.

GOLDWIN’s founder, Tosaku Nishida, was born in Nishitonami County, Toyama. The youngest of eight siblings in a farming family, Tosaku lost both his eldest and third oldest brothers to World War II. After his second oldest brother left home, the responsibility of providing for the remaining members of the family fell to Tosaku.

Everyone struggled to survive back then. Because he had experience working at a textile mill and his brother-in-law was an engineer at a knit fabric company in Tokyo, Tosaku decided to start a knit fabric factory himself.

The business was established in 1950 in what was then Tsuzawa town (the present Oyabe City). Its incorporation the following year as Tsuzawa Knit Fabric Co., Ltd. marked the beginning of the company now known as GOLDWIN.

Headed by Tosaku’s brother-in-law, who had been injured during the war, the factory employed some 20 workers consisting of knit fabric makers, women in the family who had lost their husbands in the war, and other women from the neighborhood who needed to bring money to their families. Working in a 130 m2 factory, they began making socks, belly bands, vests, and sweaters. Literally, it was a start from scratch.

This family-like, warm atmosphere is very much alive in GOLDWIN’s corporate culture today. 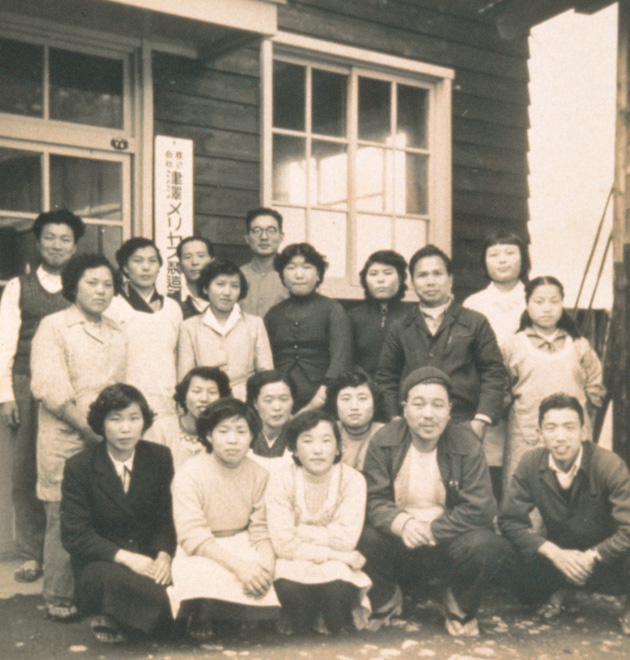 Weaving passion and dedication into hiking socks.
The company gained recognition for its high-quality products.

At first, the company’s products were flying off the shelves because of postwar shortages. However, as more sophisticated products began to arrive from other production areas, sales declined. To recover, the company had no other option but to keep on making good products. Single-minded, wholehearted dedication: that was their only asset.

In the midst of it all, the company’s hiking socks were earning praise for their high quality. With its obsession for the quality of yarn, the company produced socks that were far from cheap but were durable and long lasting. The company’s newly earned reputation was a testament to its vision for making high-end products.

Tosaku was a visionary. The news that Hironoshin Furuhashi—nicknamed “the flying fish of Fujiyama”—set world records in the 1,500 m freestyle at the U.S. National Championships brightened the mood of a nation still reeling from the war. It was then that Tosaku sensed a golden age of sports was on its way in postwar Japan, and made the drastic decision to switch to sportswear manufacturing in 1952, three years after the company was founded.

This was a major decision that laid the foundation for today’s GOLDWIN and dramatically expanded the range of its product lineup. 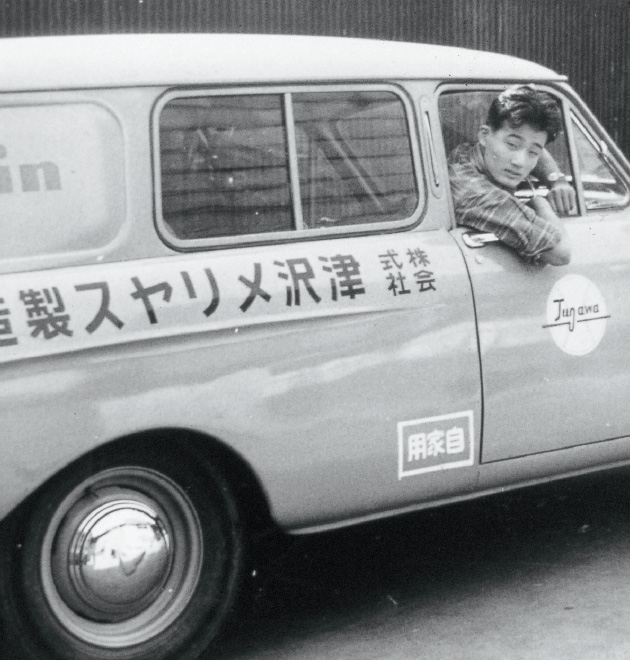 In 1964, Tosaku traveled to Europe to study the Innsbruck Winter Olympics for the upcoming Tokyo Olympics.

During those days it took 30 hours to reach Rome from Tokyo. Traveling overseas for the first time, Tosaku crisscrossed Europe for an entire month, visiting Italy, Germany, the United Kingdom, Switzerland, France, Norway, and Denmark. One of his major goals was to observe, with his own eyes, the difference between Japanese and European technologies.

Tosaku was especially impressed by France’s Fusalp skiwear. The experience made him realize the hard truth: unless Japan mastered the technology to produce functional, sophisticated products, neither its sportswear manufacturers nor its athletes would ever surpass the world.

Tosaku was not the only one in Japan who had his eye on overseas technology. But with Tosaku’s energy and determination, he rose above his rivals. This experience laid the foundation for building the future relationships between GOLDWIN and many overseas manufacturers. The founder’s sights were always set on the world. 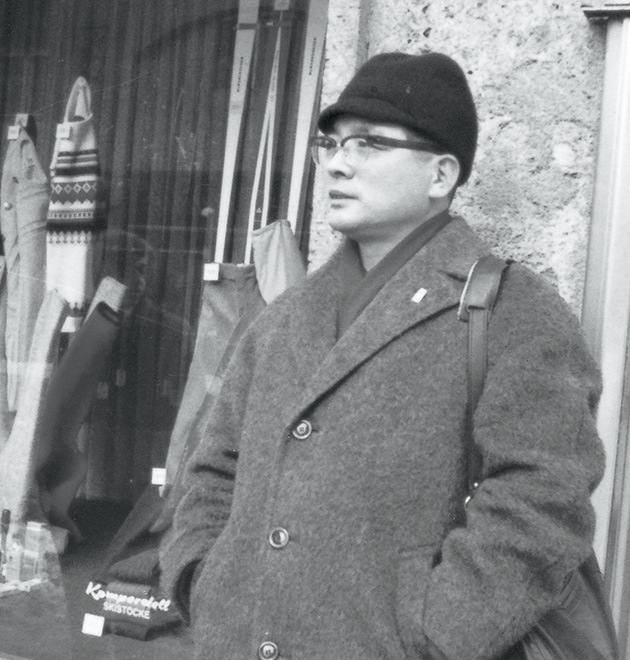 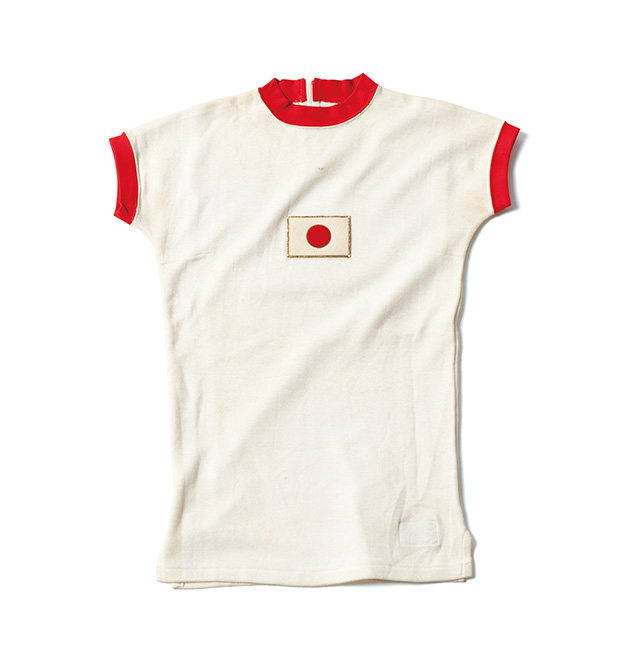 Elegant and functional.
GOLDWIN’s high-end sweater for a luxury sport.

In the postwar recovery period of the 1950s through 1960s, skiing was considered a luxury sport for the masses. Naturally, skiwear was still under development and skiers normally substituted it with daily clothing such as sweaters, pants, and jackets. These ill-fitting and bulky garments turned skiers into snowmen and made even leaning forward difficult. For GOLDWIN—a company that started out as a knit fabric manufacturer—making ski sweaters was right up its alley. GOLDWIN pursued perfection in all stages from yarn selection to weaving, while balancing functionality and design in end products. Skiers wearing GOLDWIN’s sweaters were seen gliding down the ski hill, their maneuvers effortless and elegant. 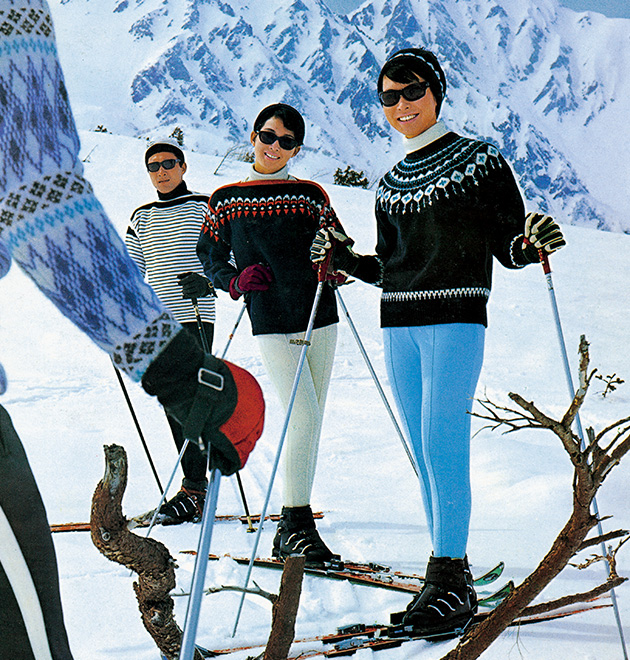 In 1975, GOLDWIN signed a license agreement with Champion Products, the No. 1 sportswear maker in the U.S at the time. Champion Products offered athletic gear and uniforms for as many as 28 sports, ranging from track and field to basketball. GOLDWIN’s collaboration with Champion was not just about distributing its sportswear. It was about introducing American sports and bringing the lifestyle of young Americans to Japan. Champion eventually became a standard choice for not only professional athletes but also ordinary young Japanese. Sports emerged out of its traditional boundaries to become a cultural phenomenon. 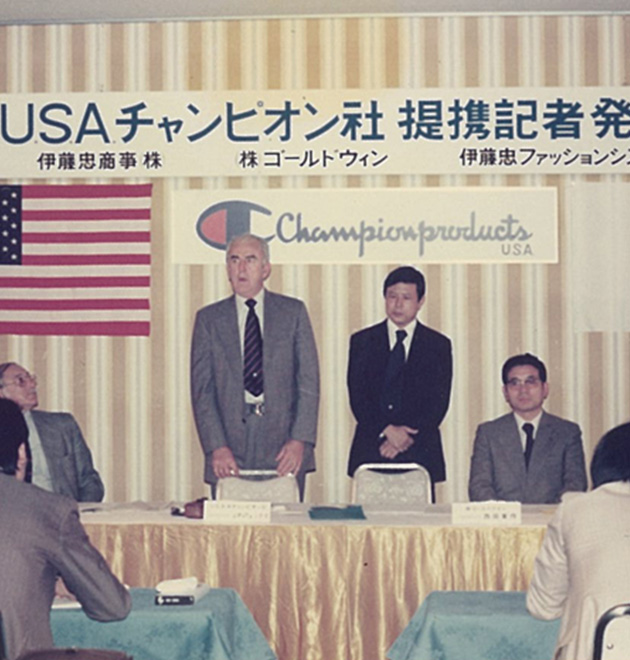 After scoring a hit with Fusalp’s skiwear and realizing the potential of overseas brands, GOLDWIN focused on the Italian brand Ellesse, which represented a sharp contrast to the French brand. Gaining recognition with the rise of Italy’s national team at the time, Ellesse’s products showcased the unique Italian beauty. Its design was particularly strong in its signature ski pants. Ellesse was a pioneer of new technologies in such areas as material development and pattern-making through draping. Its founder, the descendant of an Italian aristocrat, succeeded in translating his passion into Ellesse’s noble yet aggressive sportswear. GOLDWIN’s relationship with Ellesse later extended from skiwear to tennis and other sports. 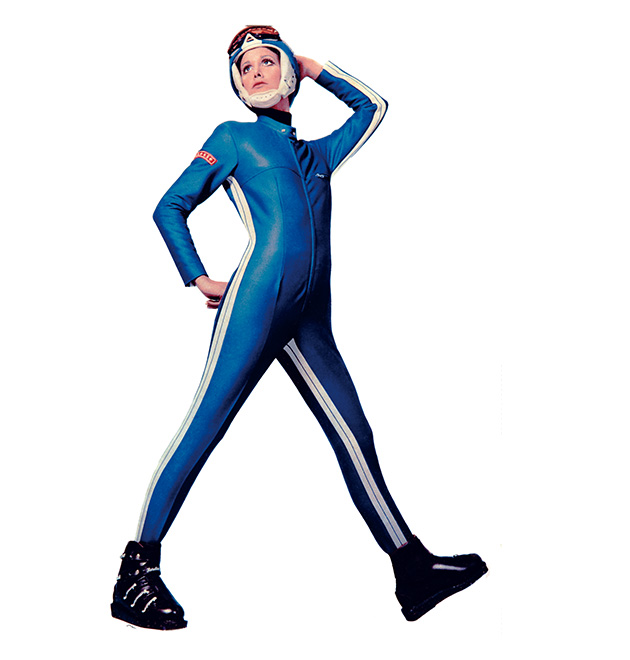 The North Face was established in 1968 in Berkeley, a city on the west coast of the United States. From the very start, the company founders were bubbling with passion and originality. Located a 30-minute drive from San Francisco, Berkeley then was buzzing with youthful energy, which added a unique edge to the brand.

In 1978, GOLDWIN began the distribution of The North Face products. With its stringent quality control, comprehensive after service, and meticulous pursuit of functionality, the global outdoor brand quickly spread its name in Japan. It was the reliability of The North Face products—which had a loyal following among many well-known outdoor adventurers around the world—that found enormous support among young people in Japan looking for heavy-duty gear.

The North Face’s signature products range from high-end sleeping bags made with an abundance of high-quality goose down; Sierra Parkas, the origin of all down parkas; and Oval Intention, the world’s first dome tent. Each one of these is a testament to how The North Face continues to push the technological envelope to a new level. 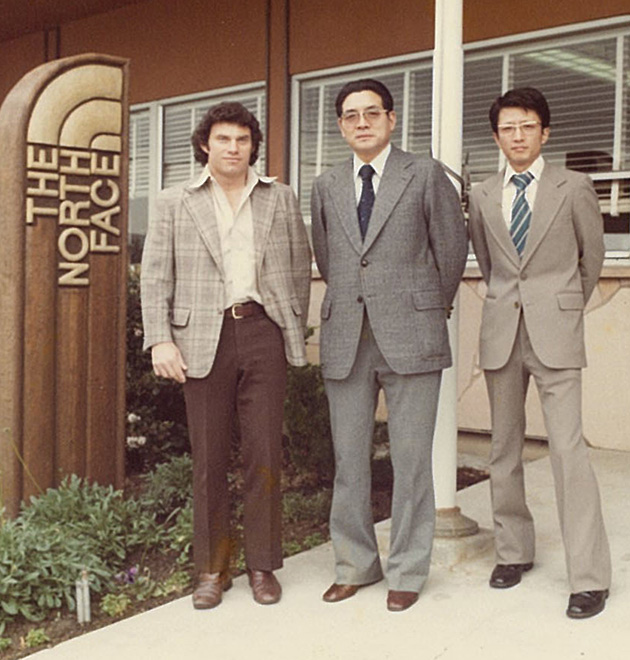 The world’s first: GOLDWIN supports Tsuneo Hasegawa in his solo winter ascent of the Alps Trilogy.

Tsuneo Hasegawa made the world’s first solo winter ascent of the Alps Trilogy, conquering the north faces of the Matterhorn in 1977, the Eiger in 1978, and the Grandes Jorasses in 1979.

GOLDWIN supported this unprecedented challenge by providing the gear for Hasegawa’s ascent of the Grandes Jorasses, which towers over the border between France and Italy. GOLDWIN was chosen for its capability in skiwear technology that it had cultivated over the years.

GOLDWIN supplied a comprehensive range of gear, including cold-weather wear such as jackets, overpants, a climbing suit made of Orlon acrylic fiber, sweaters, down jackets, and socks, as well as climbing gear such as Bivouac shelter tents, sleeping bags, and harnesses. Climbing gear and equipment determine the fate of the climber. The climber entrusts his life to the manufacturer, which in turn has to mobilize its technological prowess to meet the needs of the climber. Technology has always been mankind’s partner in progress.

After a one-year collaboration with GOLDWIN, Hasegawa’s expedition ended in a brilliant success. GOLDWIN to stretch its reach.
Advancing from competitive games to women’s fitness.

In 1983, GOLDWIN signed a license agreement with Danskin, which boasted the largest share of the dancewear market in the U.S. at the time. Founded in 1882 in New York, Danskin has offered a wide range of women’s athletic apparel for both indoors and outdoors, including its “In-Motion” series. Danskin’s leotards are particularly popular among women of all levels from professionals to beginners. GOLDWIN was riding the workout boom, jazzing up women’s fitness apparel in Japan. All things are shaped by the environment.
Helly Hansen was born out of Norway’s severe climate.

In 1877, Helly Juell Hansen retired as the captain of a merchant ship and began producing oilskin tarpaulins soaked in linseed oil in Moss, a port city in Norway. Since then Helly Hasen has grown into one of the most established waterproof garment makers in the world. Sailors around the world have embraced Helly Hansen’s waterproof fabric technology cultivated in response to Norway’s severe climate, including its proprietary waterproof fabric Helly Tech and Welder sewing technology. Helly Tech’s survival suits—which guarantee at least 9 hours of life-sustaining functions even in an Arctic sea full of drift ice—reveal the high level of its technology. GOLDWIN signed a license agreement with Helly Hansen in 1983. 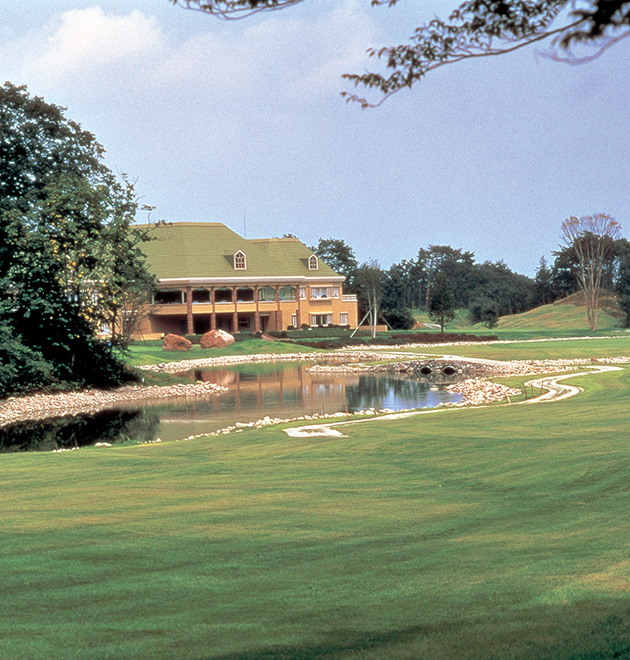 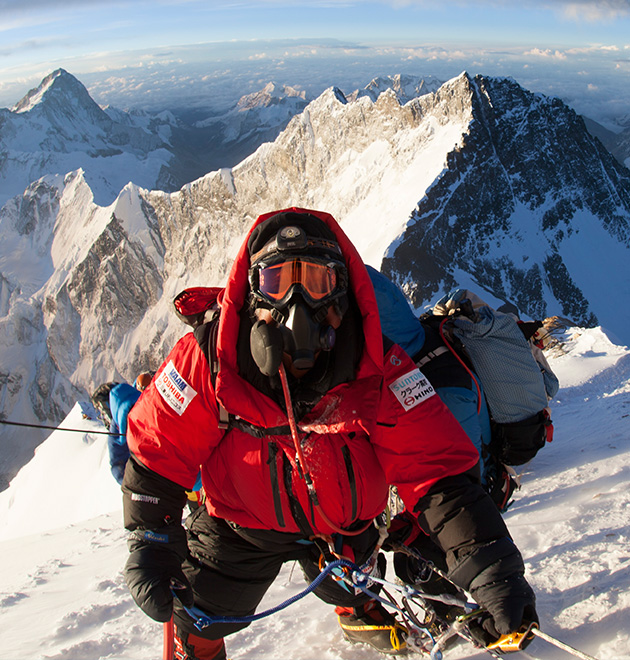 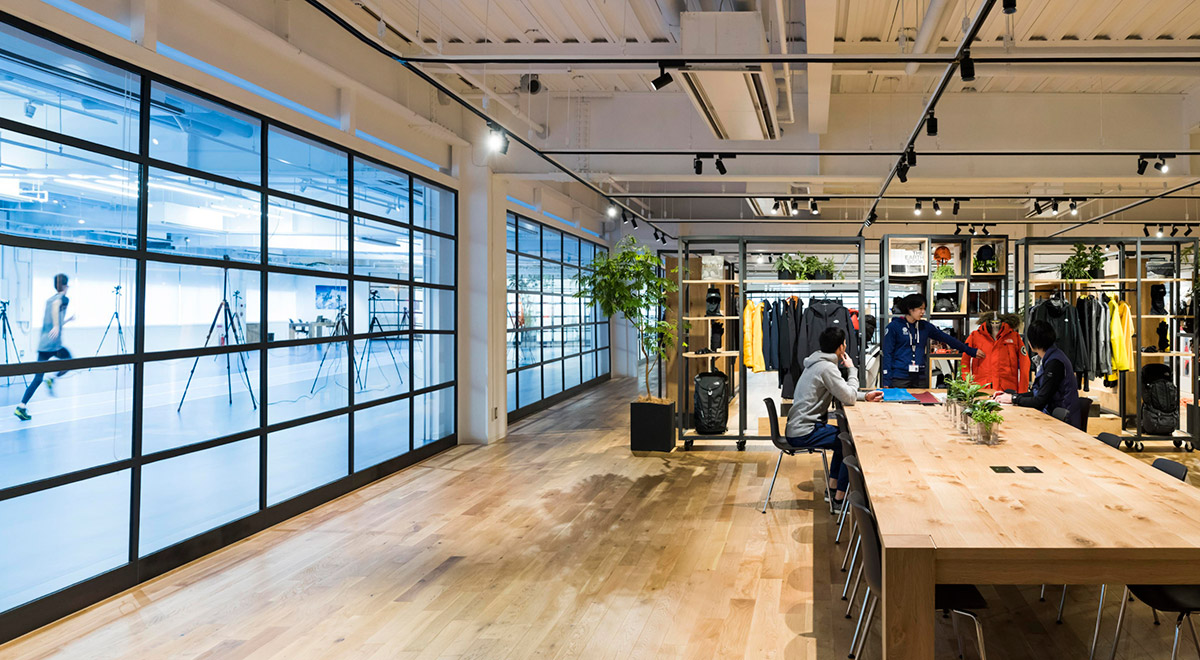 * T-shirts made with Brewed Protein * MOON PARKA
PAGE TOP
ABOUT US